Posted at 14:00h in Documentary, Land of Amber by leticia 0 Comments
0 Likes
Share

We have decided to leave this afternoon; we’ll film all morning and once back in san Cristobal we can start putting it loosely together and arranging filming the big amber shops and merchants at the opposite end of the scale, as well another possible couple of visits to an ex-amber shop assistant and a return to Simojovel in January for further scenes. 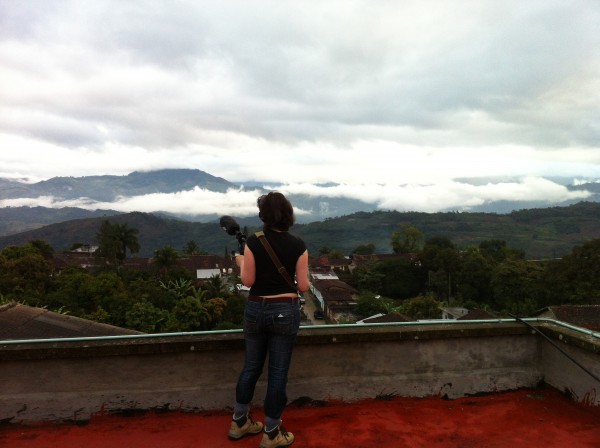 Filming on the hotel’s roof 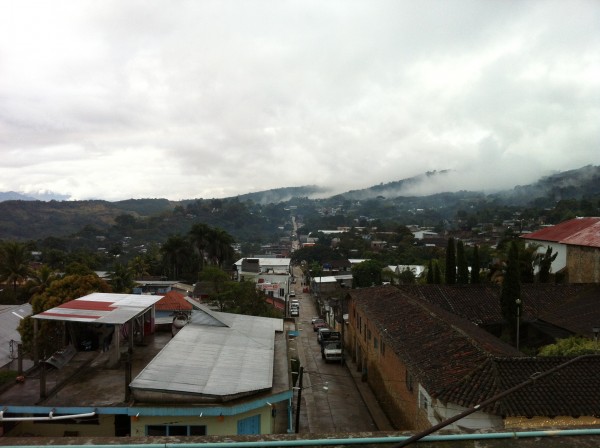 A view from the roof

We start work at 7am doing a couple of establishing shots of the town from the roof of our hotel and street shots trying to capture what first jumped out to Paul and I about this town as complete outsiders: the steep streets that go up and down like a roller coaster, the surrounding jungle, the mixture of urban and rural. By 9am we’re tired and hungry and regale ourselves with the last breakfast in what has become our most frequented eating joint here. For me it’s “huevos rancheros”, fried beans, tomato sauce and chilli and slightly watery coffee. “When in Rome…” absolutely; each forkful both brings me back and plants me more firmly in the present of being back here in this land. Mexican breakfasts, yes indeed, we might suffer the consequences later, but now I’m diving in head first. 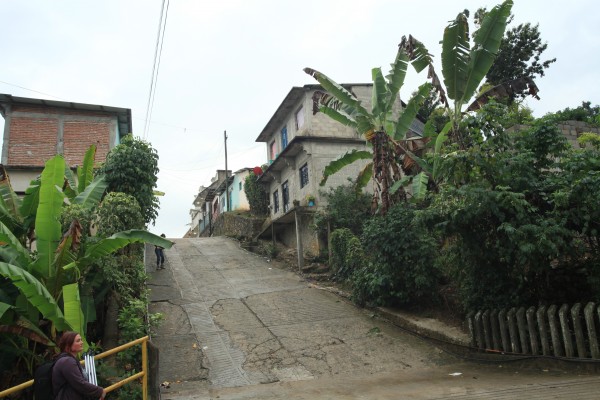 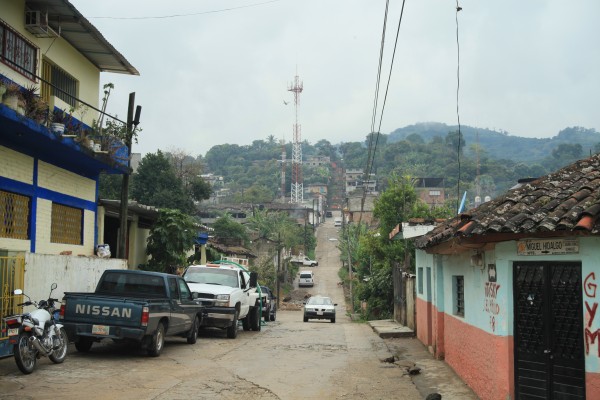 Paul makes us walk for ages to find this shot!

Later, we film inside the amber fair, organised by an indigenous amber artisan cooperative and manned by the “encargado” or “presidente”, the man in charge, a decisive and active fellow who signs my release form and organises a few others to put the fair’s big banner up, so it’ll look proper for the cameras. Himself and another guy climb up the sides of the marquee quickly and expertly, making it look easy, while there are about 4 or 5 others shouting opinions from below and finding the gringos filming the process quite amusing. Instinctively, both Alicia and Paul include in their frame a guy teaching another from the bible as they sit on a bench between us and the banner action. 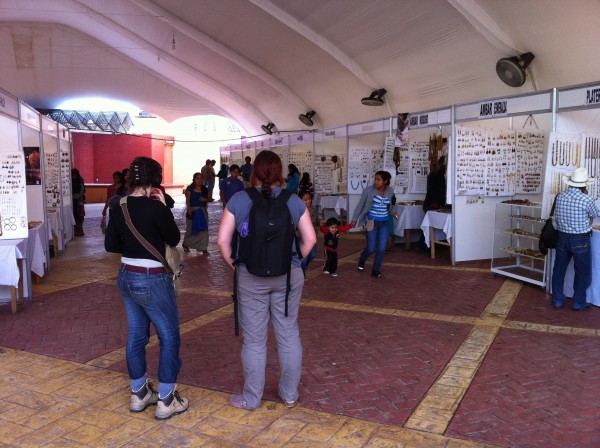 At the amber fair

Our last contributor is someone recommended -as some of the others- by Alicia’s friend and “insider” in this project, Jorge Balcazar, the director of the regional amber museum who first brought the subject to her attention. This contributor’s nickname is Diablo, the devil, and nobody calls him by his real name of Carlos. I have plenty of images running through my head when I first hear about this character, when, in fact, him and his wife Amber are some of the most relaxed and unassuming people we’ve met. A young indigenous but fairly westernised couple, he makes amber and silver jewellery and she’s the sales person. We film her at the fair and join him at his house and workshop, a simple adobe room where light pours in from the outside. He’s a sound guy; talented, he makes some fine pieces, but works at his pace, being clever and organised to find and maintain his clients in San Cristobal, where he perfected his craft for 5 years, but decided to return to his home town where he’s his own boss and can be with his friends and family. He makes what he needs and lives a simple life with his wife and child; he seems to understand everyone’s position in the amber business, from the miners to the big shop owners in San Cristobal, and has no beef with anyone, no resentment, no complaints, no envy. For me, people like them are the real “winners”, if you want to put it in US terminology, happy with their lot, enjoying their work and improving it continuously, but not to make more than they need. 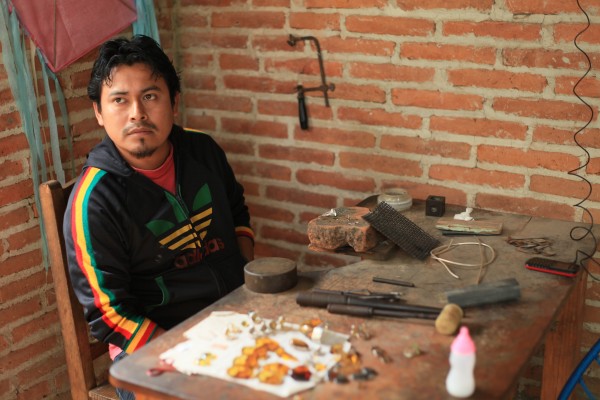 He put us all in a good mood and we head back to “Sancris” feeling a sense of accomplishment and of having met some interested people -we’re ready for the bend fest ahead on the road.