Life inside the largest park in Europe through its most domesticated inhabitants: the resident keepers.

BUY our DVD: The City Wild DVD is available to buy  here.

The Phoenix Park in Dublin, Ireland, is 707 hectares in size. One of the largest enclosed recreational spaces within any European capital city; it is larger than all of London’s city parks put together and more than twice the area of New York’s Central Park. It’s a National Historic Park, a wildlife reserve and a busy urban public space hosting hundreds of major public and sporting events annually, as well as being home to the Dublin zoo. Its inhabitants range from the President of Ireland and the US ambassador, to a wide variety of birds and a herd of Fallow deer!

It is a whole world in itself.

Forty different families live within its grounds, most are park staff, past and present. Some have even grown up in it, found love, raised families in the park and hope to die in it; they would even like to be buried deep within its earth, next to the grazing deer. “Park babies”, that’s what they call them, “the gated community”, “park people”… the ones that know and love the park as their own.

City Wild is about them; they introduce us into the park, their park, from its historical significance and as a resting bed of Irish republicanism, to the cycles of the wild deer herd living in it. These men and women’s lives and stories are intertwined with those of the park: stories of great love and loss and of the ghosts of so many generations that inhabit their lodges, their borrowed homes.

In their work, they strain to maintain a delicate balance between keeping the park as a busy public recreational space, as a nature reserve and a heritage site, with the visiting public sometimes their biggest obstacle.

City Wild SOLD OUT at its first Irish screening. 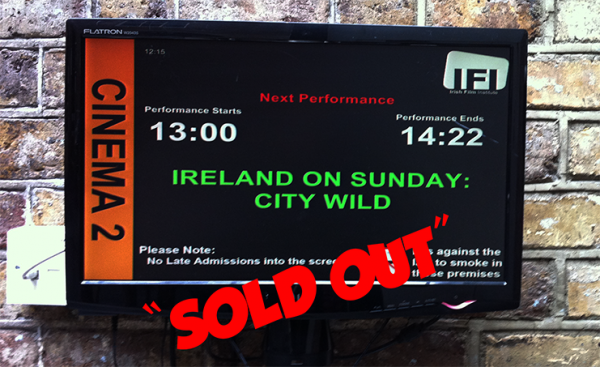 Well, what can we say? A big thank you to the Irish Film Institute and to Sunniva O’Flynn for programming City Wild as part of Ireland on Sunday. A big thank you to all the people who packed out the screening and to all of those who stayed behind for the Q&A.