Posted at 22:00h in Documentary, Land of Amber by leticia 0 Comments
0 Likes
Share 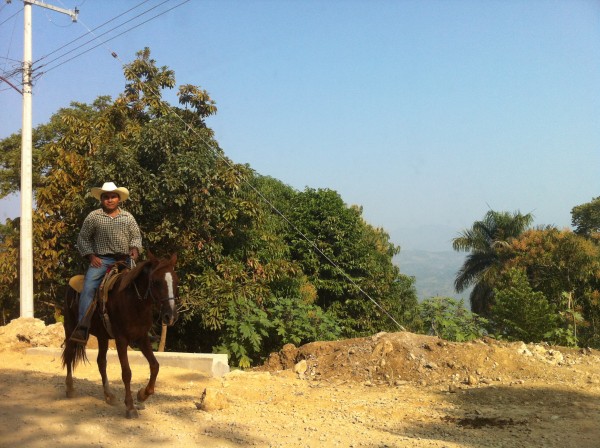 On the road to Pauchil

The unpaved road to Pauchil is in the process of being flattened and widened, which, Alicia tells us, makes the journey very fast now and in 10 minutes we arrive at the bottom of the hill that’s the centre of the village or “community” -as they call small rural indigenous communities- of Pauchil (land of amber) Los Cocos, to distinguish from the many Pauchils around the area, although there are no coconuts here. We leave the car on the road by the school and the amber centre they’ve built in a wooden building to attract tourists to the village and the mines, although foreign tourists hardly make it to Simojovel because of the long difficult road, but they have the “build it and they’ll come” way of thinking, which isn’t bad and improves access and resources for the community anyway. We make our way up the steep hill to Dionisio and Esperanza’s house, carrying all our equipment and some food for them, passing other modest houses, some in the traditional Mayan way, a hut here, a hut there, one is the fire kitchen, one the bedroom, made of wood the poorest and concrete the better ones. Dionisio and Esperanza have joined theirs, though the kitchen is still a wood hut attached at the back, so there’s a way for the smoke from the fire to escape and the toilet come wash room is also attached to the kitchen. They have plenty of chickens and cockerels and four dogs that lounge around. Alicia introduces us and we’re invited inside where we discuss what we’re here to do now, while a small telly plays cartoons in the background, that we all get distracted by in turns. 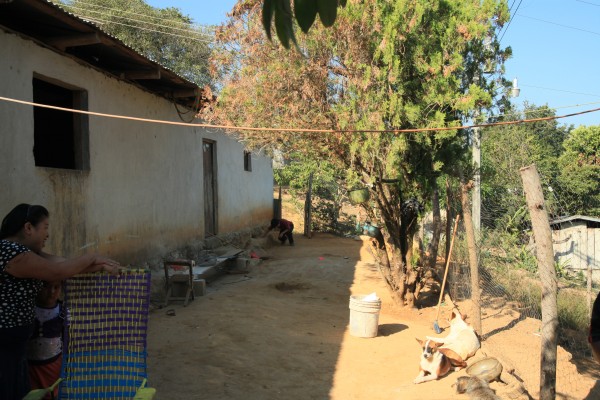 We spend a while at first explaining what release forms are and why we need them to sign them if they’re are going to be in the film. Alicia tells us afterwards that they have been taken advantage of before, by agreeing to things and signing documents without fully knowing what they were, by trusting more “developed” people to help them as they said they would and been taken for a ride, so they’re naturally cautious and suspicious. It’s not just them, all indigenous in Mexico, because of lack of education, lack of cunning and illiteracy, have been continuously conned, so they’re guarded, particularly of Paul and I, who, to them, have just landed and look as “gringo” as can be. Once they understand that we’re here to tell their story and that we’re not going to make a profit on this, we’re not even fully funded and are financing most of it ourselves, they relax. For them, we’re all “gringos”, we’re all from the US, have money and come to make more off them, so again, we need to explain it’s not like that and Alicia, in the four years that she has been coming here, has been doing lots of work for them too and is offering to do more, from making a CD for Dionisio’s choir singing nieces to offering to design stickers for his new honey. 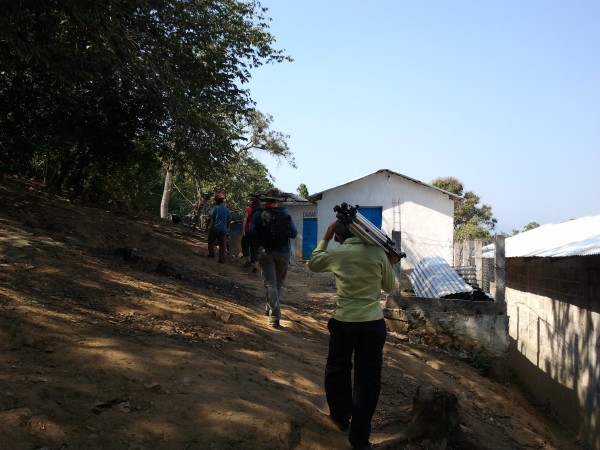 Setting off to the mines, two more children behind me, and the eldest insisted on carrying the tripod I swear! 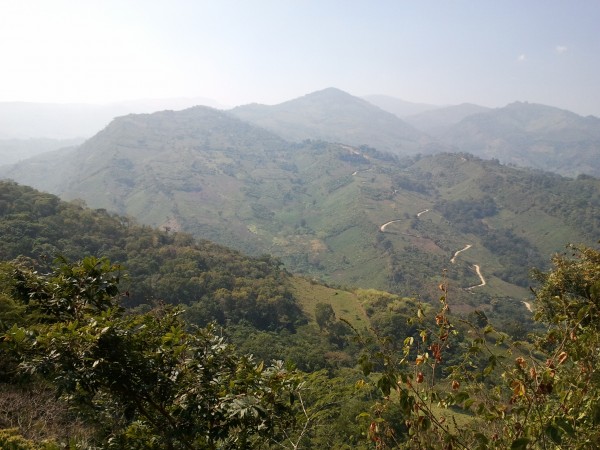 The valley of the mines 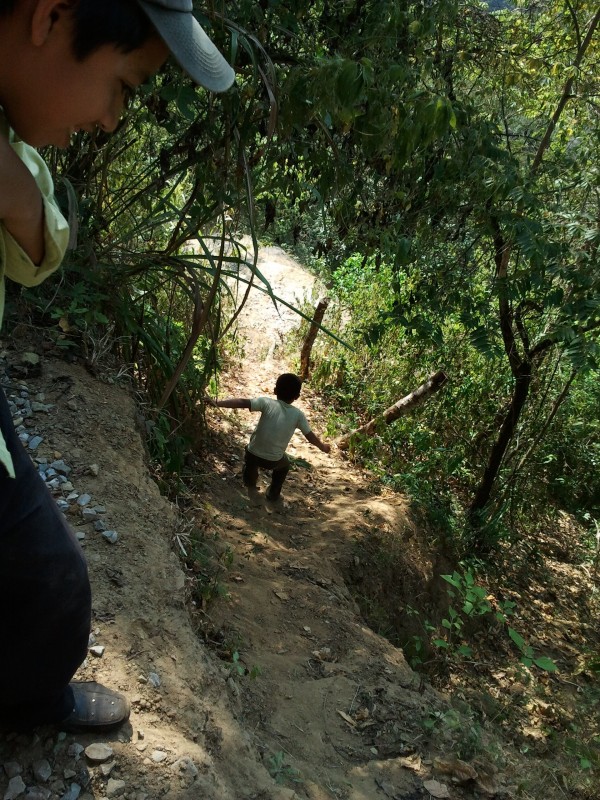 The children skid down one of the paths 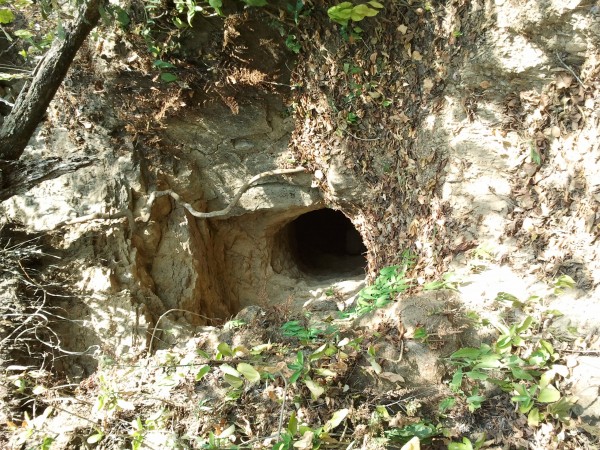 One of the many mine entrances into the mountain

Paul and I do a couple of establishing shots of their area while Alicia explains each clause before Dionisio signs the form. After we film the whole family, polishing and perforating the amber, we set off for the mines, though the heat is already taking its toll on “the Irish”. As well as Dionisio leading the way, his two pre teen sons and a neighbour’s kid also join our single-line procession through the mountain path to arrive at Dionisio’s two mines. We carry out an interview with him at the mine’s entrance and then get ready to walk inside, all the way to the end, filming the process with two cameras and LED lights and, although I felt claustrophobic at the thought initially, this mine feels positively roomy compared to most of the ones we’ve passed on the way. This one is old and has been widened gradually so that we only need to bend down or crouch in places, in most of the others, it’s a crawl only job, not just to get in, but to work inside, truly inhuman and extreme, I think, but needs must and if they can fit in, why make it any wider; needles to say, all the miners we see are fairly slim, partly because they sweat half their body weight inside. As we get further inside, maybe 80 metres, my worry is more the size of our entourage and whether there’s oxygen for all of us in here. We see a wheelbarrow lying on a wall, a light in the distance and finally get to the end of the mine and meet Polo, another of our contributors, who pays Dionisio rent to work in his mine and try his luck at finding some amber. They all take turns hammering and chiseling, Dionisio’s eldest son too, but the rock is too hard for him here. Polo spots something shiny and takes over to arduously uncover a sliver of amber on the rock, which he extracts and hands to us as a memento. Paul’s camera is seriously overheating, we’ve been here about half and hour so we leave Polo until the next day, which we’ll be mainly on him, and we walk back out, sweating and with a nice patina of grey dust all over; and these guys do this 6 days a week, crikey! 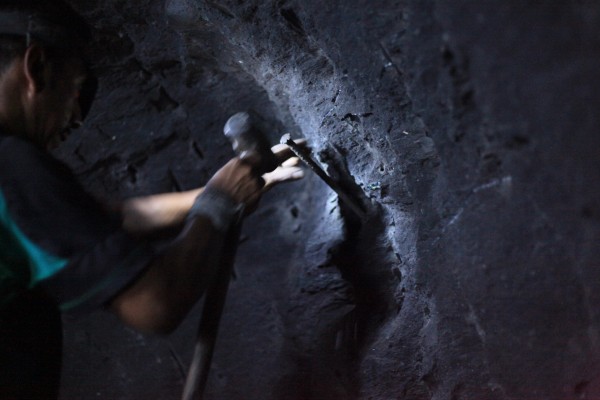 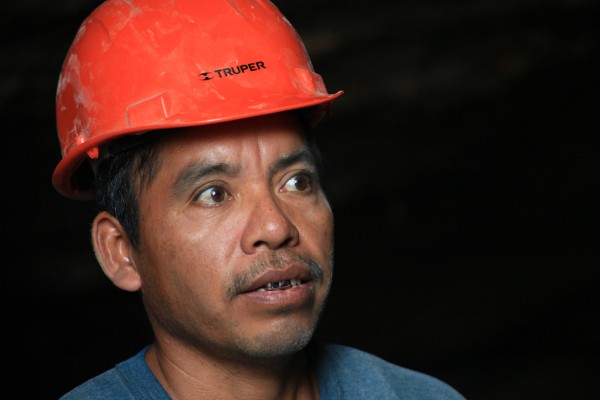 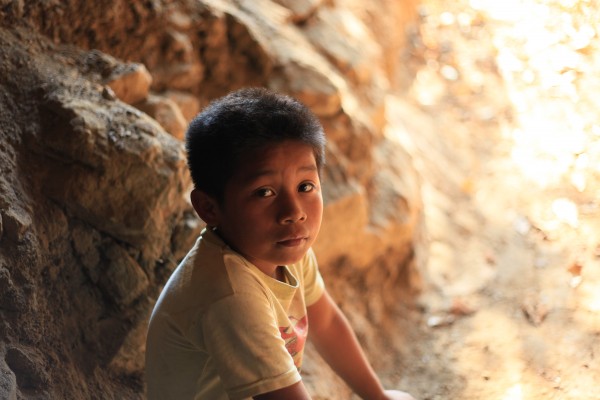 The neighbour’s child at the mine’s entrance

Esperanza, Dionisio’s wife asked us before wether we would join them for lunch and that she’d kill the biggest cat for us; of course, she was joking, she’s going to kill one of the big hens instead, I’d like to see it and film it even, and Alicia says she’ll wait around the corner. In the end, we decide it’s not crucial to the story, so we leave her to it, not without having the kids tease Alicia by holding the lucky hen’s neck and pulling it as if to kill it. When we left their house for the mines before, after closing the chicken wire “gate” to their front lawn of yellow earth, I notice we’re stepping over a little stream, now running bright red… Esperanza is a fast worker, she’s already killed the chicken and is bleeding it. I’m looking forward to that hen stew. 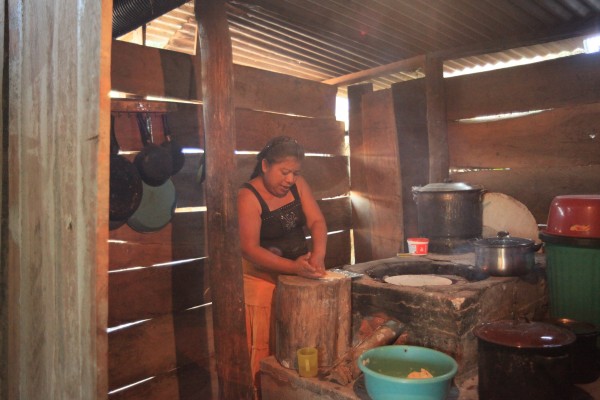 Esperanza at the stove

When we return from the the mines, we film Esperanza finishing the meal and share a much welcomed lunch with them. They ask us about our land and how things are there, they’ve heard there’s a lot of money in Europe and we laugh and say that maybe that was true before for some people, but that we’ll be lucky if we can actually own our house in 30 years-time and they call their house theirs straight away, no banks, no mortgages or debt; they have land, animals and two mines and now Dionisio has started keeping bees and making hone. This is certainly an entrepreneurial family.

In the evening Alicia gets an intriguing text from one of her Zapatista friends that she works with, telling her to be prepared, that something is going to happen on the 21st; he can’t tell her more and he shouldn’t have told her that much, but now she gets worried and I do too. She texts back asking whether we should stay here or go back to San Cristobal but they can’t tell her that much either, only that it’s going to be like “May a few years back”. She concludes it’s probably a march en masse into San Cristobal as it’s happened before, she doesn’t think they’re going to block any entrances and exists into the town this time. That could be problematic indeed. We’ll have to wait for the 21st and the end of the world. Incidentally, the Mayan calendar is circular and cyclical, which means that there’re ins’t a linear end, and the 21st of December 2012 is just the start of new solar cycle according to the Mayans. So there, for anyone who was wondering.