Posted at 09:30h in Documentary, Land of Amber by leticia 0 Comments
0 Likes
Share

This morning it hit me, as soon as I tasted the chilaquiles for breakfast I knew I was here, it brought back memories from previous trips; when I smelled shoe polish passing a shoe shine stand in the airport, I was back in San Cristobal. As we travelled back to the airport in the morning sun today, the low irregular buildings of different colours in the modest suburban streets of the area, almost made me cry with nostalgia.

I first came here with my family in -I think- 1989; I was a moody and dreamy adolescent, I’m still two of of the three. I have been back six more times, first due to my mother’s work and later to my own. The first story I wanted to tell as a documentary was a Mexican one.

In that first trip, moody as I was and angry that I wasn’t experiencing this on my own, maybe with a handsome fellow traveller, I was taken aback. Literally, I thought I had time travelled. My first impressions of Mexico City was of being in a 1940s movie, of slightly faded decadence and latin glamour, a world I clearly knew nothing about, but had seen enough movies; I was in Mexican Casablanca! San Cristobal was a different kind of mind-blowing: it was a sad and beautiful small town, where the fog lingered most of the day, due to the surrounding forests, and populated by extremes: the Spanish and other European descendants were holding on tight to their ancient colonial status and winning; the Mayans of today would step off the pavement to let the whites pass and the women, dressed in stunning regional costumes, would hurry through the streets from the market back to their communities, with their eyes nailed to the ground. After the indigenous Zapatista uprising in 1994, which was the basis of our previous doc, San Cristobal became the It place to be; young travelers flocked to the town as well as about 150 different NGOs, all to support the indigenous, although a few just to help themselves. The town became a hippy mecca and the only ones that weren’t benefitting much from this, were, ironically, the indigenous. My last time here was the summer of 2007 so I’m anxious of what I’m going to find. Tourism of all kinds, including revolutionary tourism -yes really- had made the town less genuine but even more insular, that was my impression during the last project; I ended up gasping for air, preferring getting away to more remote communities, even if it meant sleeping on wooden tables, and I don’t even like camping.

These of course, are just my own opinions and impressions, no one else’s, and there are as many of those as people; just saying… Off to board another plane now. 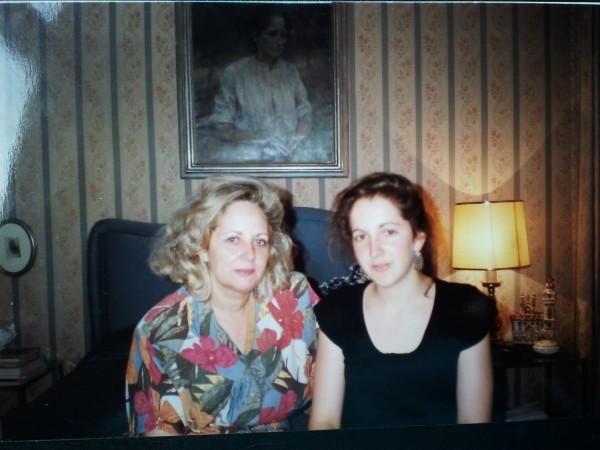 Me as a moody adolescent with my mum