Posted at 16:00h in Documentary, Land of Amber by leticia 0 Comments
0 Likes
Share 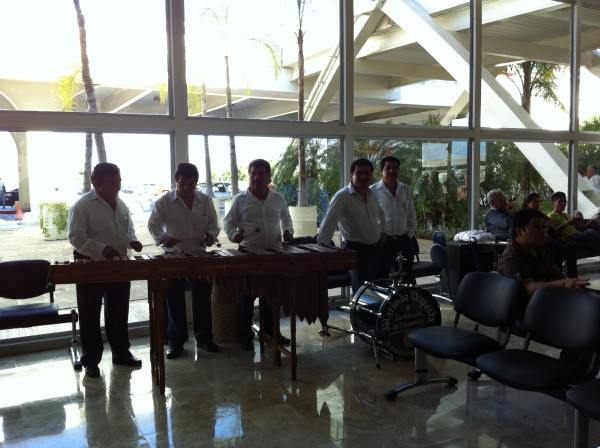 We arrive at the little airport in Tuxtla Gutierrez, hot and busy, this marimba band in the photo welcomes visitors at full blast and we quickly see Alicia’s smiling face, first a colleague in the last documentary and slowly and steadily a good friend who we haven’t seen in 5 years. The heat, the loud marimba and the dash up the mountain to San Cristobal, makes me feel like we never left and nothing in the way signals much change, more traffic perhaps, and Alicia’s driving much more adjusted to the local ways (she’s Spanish but has been living here for almost 15 years and has just obtained the Mexican nationality; quite like myself in Ireland, except the nationality) 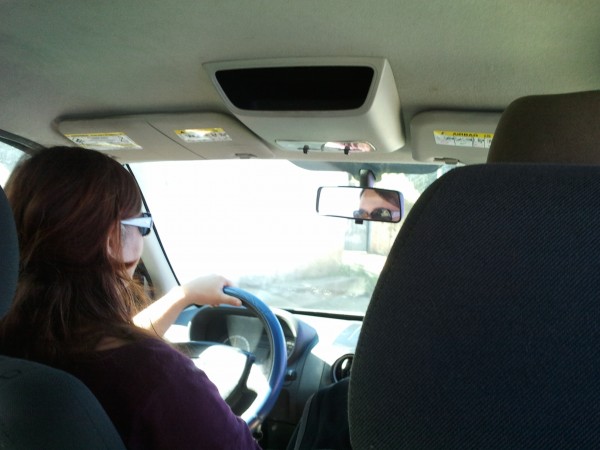 We go through a couple of police stoppages at each end of the journey, where they let us pass by driving slowly while a small but stocky policeman, his head down and peering over the top of his big sunglasses susses us out -stereotypes come from somewhere, and right now he’s just it, “Mexican police”, out of a film, actually Traffic pops in my head …can’t help it. 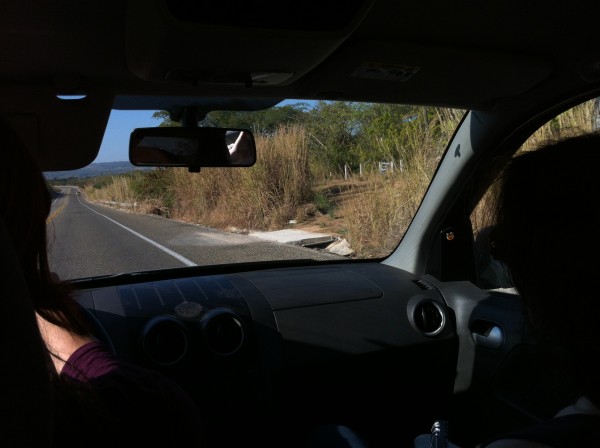 The road from Tuxtla

Into the pretty streets of San Cristobal, lined with big beautiful Spanish colonial houses, with large wooden doors and painted in vibrant oranges, reds, indigo blues… that scream pure Mexico. The pavements are a metre high, to let the water rush by below in the rainy season. I see more people, more cars and definitely more bars, restaurants and hotels; amongst the visitors, I catch a glimpse of only a couple of indigenous women carrying crafts and clothes to sell. 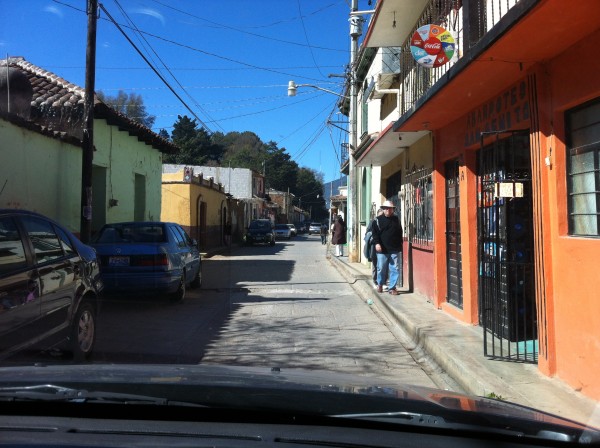 After we cross town, we arrive at Alicia’s quieter neighborhood, at the edge of the countryside, where her boyfriend Ilhui is waiting by the external metal gate to let the car in -it does feel like we never left. While they make dinner and we flop out on the sofa having a beer -this is the easy time in the working trip- people call in, for a message, a quick chat, a favour, and Paul recalls that he’d forgotten what San Cristobal was like in this sense, the plenty un-announced call ins. It makes me think of rural Ireland, and I think it’s sweet, but sure, at the moment, I’m just a visitor having a beer, no responsibilities.

As it turns out “the Irish” are expected at a birthday party tonight. The party lad phones to remind Alicia and Ilhui to bring us. We are all tired and these Irish are bound to disappoint, I see now there’s a lot of pressure that comes with this tag, and I’m rubbish at parties anyway, so is Paul, we’re bad at casual and introductory chats: “who are you?” “where are you from?” “have you been here before?” blah blah blah.

We needn’t had feared: the party is loud, chaotic and nobody is interested on any information. There’s only a few people here but it feels like a lot more, particularly due to the party man, an eccentric character from the Basque country, he lands here every year for the last 15 for his birthday and stays to help the indigenous -this one apparently, does do that. He’s all for the poor and for the third world, not interested in Europe or the US, very Basque nationalist too and keeps shouting at Paul about anglo saxon this and that. Paul asks can I stop laughing and translate because he doesn’t have a clue what this guy is saying, I tell him not to worry, neither do I.

Thanks to Ilhui who’s a musician having a gig in town and to Alicia’s masterful preparing of the situation and great care of us, we make an early escape.