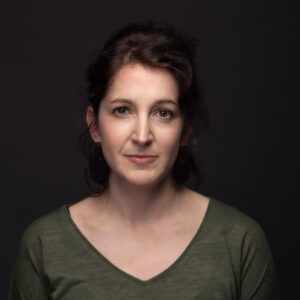 Leticia’s life and career has taken her from Spain to Ireland and from theatre to film. Initially going to the UK to study Drama, she then moved to Dublin to set up a theatre company with friends. After 3 years directing actors and puppets -very demanding this lot- she went back to study Film Production and fulfil a passion for visual storytelling. After graduating, her nose – and nosiness – led her to documentaries. In between, she wrote. As she built up confidence and found her voice in her adoptive language and country, she was drawn back to writing and directing live-action. She has since made several shorts and has a feature in development with Screen Ireland and producer Julie Ryan. Another feature and a series are also on the works – her voice, as it turns out, is tragicomic.

Leticia is also an educator. She leads and lectures in the BA year in Film & TV Production in Coláiste Dhúlaigh College of Further Education, in partnership with the University of Wolverhampton. She’s a member of Women in Film and Television Ireland, The Writers Guild of Ireland and the Screen Directors Guild of Ireland.

A feature comedy-drama about stereotypes blowing up in one’s face. An aspiring media influencer, her selfless act and a refugee who refuses to fit the mould. Awarded 1st and 2nd stage development funding by Screen Ireland. Currently being developed with producer July Ryan (MK1 Productions).

Comedy feature. A discreet Irish widow tries to live it up in Southern rural Spain with little knowledge of the culture and more than a handful of middle-class expectations. Most of all, she’s not prepared for discovering someone else’s granny in the granny flat of her sunny home. In development.

Half-hour series. Every small-town has big secrets. Caroline Hurley will get to the bottom of them, if her past…and her interfering mother don’t trip her up.

An anthology of four short films about the tragicomedy of human relationships impounded by distance and Covid. Written and produced remotely at the start of the Covid-19 pandemic in Ireland. Supported by the Arts Council of Ireland.

Short. A high blood sugar attack, a house turned upside down and a cross-country trip on a mobility scooter. Supported by Kildare County Council. In post-production.

A short dark comedy-drama about a middle-aged woman who walks out of a life of having it all. In development.