Posted at 20:17h in Documentary, Land of Amber by leticia 0 Comments
0 Likes
Share 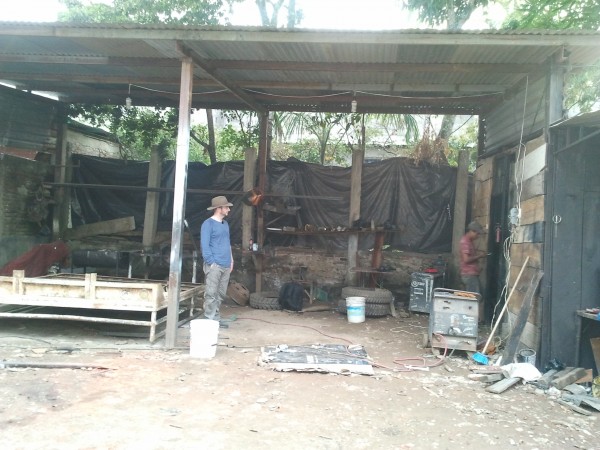 Paul getting some welding done in Simojovel

Today we met one of the infamous “Chinese” amber buyers. We found out there was one renting a room in Simojovel for a few months and went investigating. Ah, the joys of a small town with no outsiders, it’s easy to find out who and where “the Chinese” lives.

We knock on the half glass front door to his small lodgings; we’ve been told to ask for Chen (I feel slightly embarrassed, really, Chen?). At first he’s taken aback by these four people -Jorge is with us- three of them obviously not from here, at his door. He’s more comfortable talking in English so I explain what we’re doing and that everyone has been mentioning the Chinese coming over and raising the price of amber, making the miners delighted and the small artisans and bigger merchants enraged. A very interesting conversation ensues; he’s been coming here for five years and has seen the price increase very fast lately and he certainly wasn’t part of it because he doesn’t want to pay more than he has to. It turns out that maybe one or two years ago one Chinese might have been conned by a middle man or merchant into buying amber that he thought was directly from the miners at a higher price, and then the rumour spread that all and any Chinese were paying the same and it got the ball rolling into asking for higher prices from foreigners. He’s less forthcoming at first, but once he gets going we can’t stop him, he’s furious, he thinks it’s mostly the Mexicans who are raising the prices and that he’s found a lot of mess and dishonesty in the people he’s dealt with lately. He’s sick of each Asian being referred to as “El Chino” (The Chinese) and putting them all in the same basket. And so, the myth is further stretched and complicated, but I suppose, again, there are as many views and different stories as the people we talk to. He doesn’t want to be interviewed on camera though but he’s happy to give us information and his experience.