Days 13 to 16: filming in the amber shops in San Cristobal

Posted at 20:46h in Documentary, Land of Amber by leticia 0 Comments
0 Likes
Share 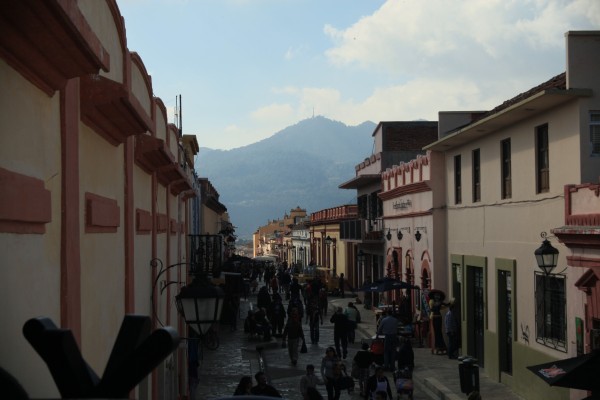 After the short rest, Paul is able to stand straight again without contraptions and the two of us head into the centre to arrange shooting in a few of the amber shops.

Naturally, they want to participate to increase the visibility of their businesses and we want to find out everything we can about amber commerce at this level as much as at its origin, and the relationship between the two. This is not to say that what we’re told on camera is the full reality of the situation, it’s what we’re told, but the same goes for the miners and the small merchants. We don’t do investigative documentaries, but testimony ones, I suppose; we don’t put our findings in a neat voice-over with a clear message, the contributors give us and you, the audience, what they know and what they think and feel. The beauty and difficulty of this is that, of course, they are all from someone’s point of view, they are all subjective, so is anything else of course. 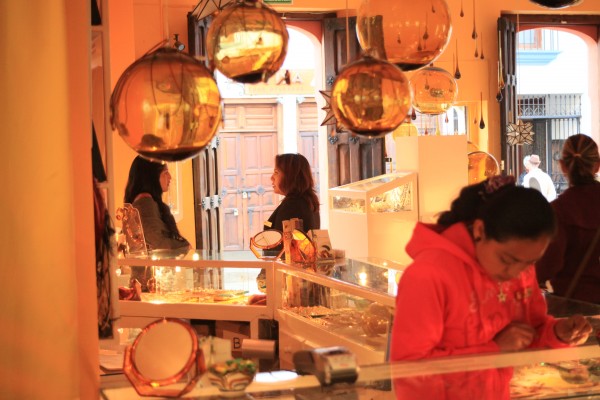 An amber jewelers’ in the tourist area

Amber display in a shop

Everyone wants to do better for themselves, most people see someone else as the problem in a situation of inequality or don’t see a problem at all, and there are big merchants and then there are big merchants. The only thing that it’s clear here is that the miners have it incredibly tough and that they’re at the bottom of a chain, where most of the time they have no choice of how they work and how much they can get for their findings if they want to eat. As Polo put it while chatting to his friends in Pauchil “we need to find markets”; they need to be able to work and sell their work directly, be it less elaborate, the amber of lesser quality because they can’t afford any better when they buy for their own polishing, but it’ll be theirs, cutting out the middle man, the coyotes, as they also call them in this context, the ones that just buy from the most desperate and resell it to a bigger buyer or even merchant. Those we’re told, are slowly disappearing, because the miners are selling more directly, and sometimes loosing money in the process if they have to come all the way to San Cristobal and spend on the trip and stay, and also because some foreign big buyers, mostly the Chinese we’re told, are buying directly from them and paying very well. 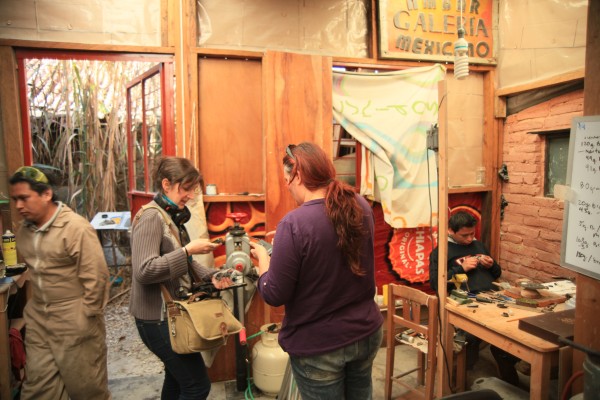 Setting up to film in a workshop 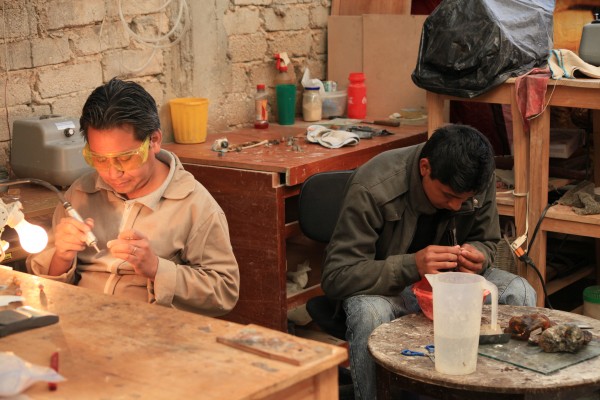 A workshop in San Cristobal

Everyone mentions the Chinese, they’re becoming larger than life: “the Chinese are buying hundreds of kilos a moth” “they’re paying too high per gram and making it impossible for artisans here to buy and work the amber” “they’re creating a lot more inequality” The Chinese are paying properly” “They’ve introduced a machine to excavate!” I love it, they’ve become a myth, and we’re pursuing it by asking everyone we interview. We may also have the chance to talk to one directly back in Simojovel. We’ve all decided we need to go back for a few days next weeks. We want as many pieces of this world -sometimes puzzle- in “the can”; it’ll be a lot harder to construct a narrative but, hopefully, a lot more fun to watch. We’ll de the investigating and bring you the personal stories, the pictures, the legends… 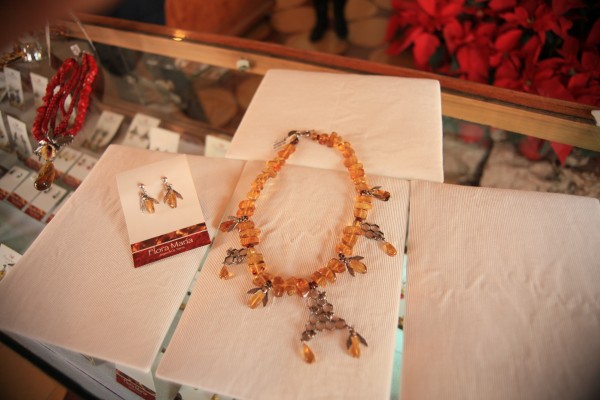