Day five to six: a night in the best hotel in Simojovel

19 Dec Day five to six: a night in the best hotel in Simojovel

Posted at 10:00h in Documentary, Land of Amber by leticia 0 Comments
0 Likes
Share

Simojovel is like a mini San Francisco carved out of the jungle and much simpler in its buildings, of course. Out of the main square, with the church on one side and the town hall in the other, steep streets come out from all corners going up to hills with more churches on top, or they end in a wall of vegetation; on the other side, they go down and up with the jungle and the mountains at the end. I really like this place. It’s chaotic and busy and all the cars and trucks in the town seem to be out at the same time blocking each street. 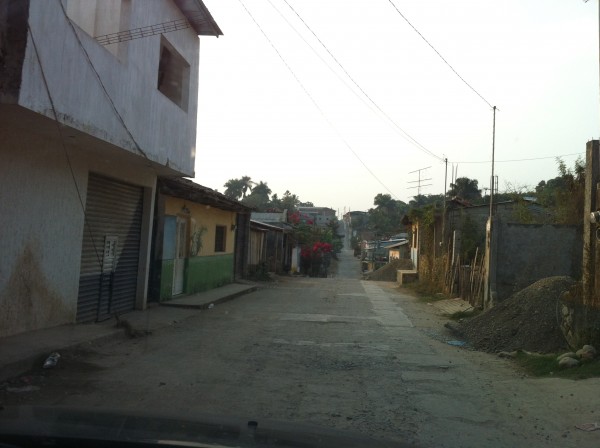 There’s a fair on the main square which we’re told is here until Christmas eve. Our hotel, which is a no frills old box of a two story building with airy rooms, faces the square and the fair and our three bed room looks directly at it and at the three competing rides and taco stands. It’s proper hot here, must be over the 30 degree mark so we’re happy that our room has “climate”, as they call it here, or air conditioning. The rides and their competing ear busting pop and dance tunes and frequent bangers perk up an hour after we come back from having something to eat. We’re so ready for bed, thank God for the slightly muffling ear plugs. 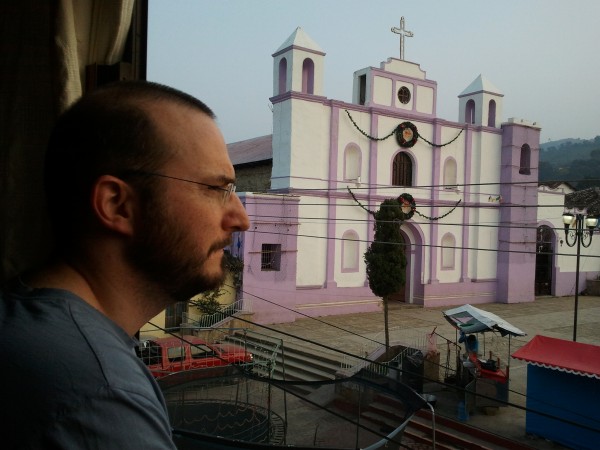 Paul looking out of our bedroom window

I take a shower after Alicia, in the rain water shower as Paul calls it, since it falls softly and randomly, and I notice the plug hole isn’t working too well, in fact when I come out, there’s a centimetre of water in the bathroom and a puddle in the bedroom. We go to ask for a mop but they come up to clean it from reception. At 9:30 in the evening the music stops and the fair starts winding down, it’s only Tuesday, after all, we’re so grateful. In the middle of the night a strong drain pipe smell wakes me up and I can hardly breath.I think of the shower straight away, but I’m so tired that I ignore it. A while later, getting up to go to the bathroom, my feet land in water off the bed -oh, oh!- I try to find a dry spot but it’s difficult, Alicia notices me dancing around the room and I tell her; when I turn on the light, we see the real scope, almost half of the room is flooded. Alicia and I venture down to the lobby to see if there’s anyone on night shift. Ha, silly Europeans! The lobby is in complete darkness, we switch on the light, walk to the front entrance and see it firmly locked and padlocked, Alicia mentions emergencies and I think of another film with creepy lonely halls, The Shining. We even try to find a mop ourselves, opening whichever doors we can on the ground floor, but to no avail, so we just go to sleep in our puddle room. The end of this story is that there’s a major drainage problem and they spend the entire next day fixing it, while they move us to the room above, which is the same, minus the climate, but let’s get to the mines.